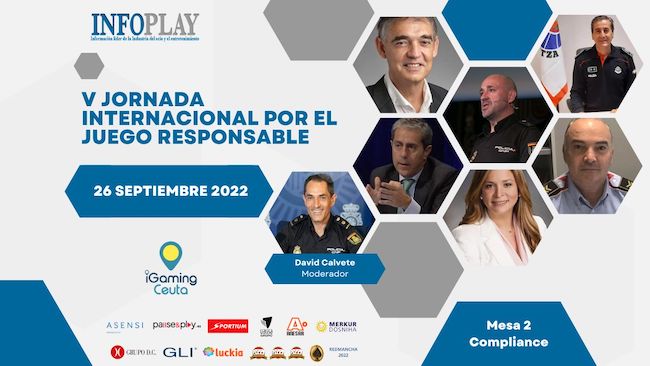 José Sánchez-Fayos, Beñat Imanol Fuentes, Agustín Gastaminza, Xavier Salvadó, Juan Carlos Gil Muñoz and Karen Sierra participated in the second discussion table focused on "Compliance", introduced by Mariela Huenchumilla and moderated by David Calvete.
INFOPLAY |
2022/10/19
The day continued with a second round table in which the entire “Compliance” environment was developed from the point of view of different industry players.

In this case, the section was presented by Mariela Huenchumilla, Dreams Responsible Gaming Manager and President of the Chilean Responsible Gaming Corporation, who wanted to emphasize that this was the first edition of the event that could be held in person and also highlighted the importance of regulatory compliance. These are born with the aim of putting solutions and prevention to the harmful game, one, whose lack of control can affect all the components of the activity, businessmen, workers, regulators and not only the players.

This second table was moderated by David Calvete, Head of the Games of Chance and Betting Control Service of the Spanish National Police, who greeted the attendees, introduced the speakers and gave a few brief touches on the subject to be discussed, the fight to maintain Responsible Gaming from the different authorities.

José Sánchez-Fayos, General Coordinator of COFAR, took the floor first, who began by providing context for the current situation, commenting on the regulatory model that exists in Spain and explaining why he considers it to be a successful model.

He also reaffirmed what for him is a reality, that the sector complies, as the reports of the different State security bodies show. After this, he continued landing what the main CSR measures are like in the different channels, especially in the case at hand, the hotel industry. And this translates into its accreditation of "Good Responsible Gaming Practices".

With Beñat Imanol Fuentes, Head of the Ertzaintza Gaming and Entertainment Unit, the operation of the "Basque Gaming Observatory" was explained, the purpose of which is to be a centralized information, study and research service.

He began his speech by recalling that the Ertzaintza was born in 1982 and that a year later, in 1983, the Gaming Unit was created, which makes them a Police force with a long history of action in this sector.

In addition, they offer an added value to the DGOJ when it comes to homologating the machines and that is that they have a technical office that serves as a laboratory to analyze that all their characteristics are in order and in accordance with the regulations. This entity has also developed a machine opening manual, so that at the time of inspections, the agents know exactly what to look at and how.

The neatness at the time of carrying out each of its inspections was also treated and revealed the extensive control that the Ertzaintza has of the activity in the Basque Country.

Afterwards, Agustín Gastaminza, Chief Commissioner of the Internal Security and Administrative Police Area (SIPA) of the Navarre Provincial Police, took over, who made a thorough examination wielding how they work for Responsible Gaming from their region.

He commented on the importance that this entity gives to the training of agents due to the changing nature of the sector. They offer basic training and permanent recycling.

Continuing with the work carried out by the regional security forces, Xavier Salvadó, Sotinspector de Cap of the Unitat Central de Joc i Espectacles of Mossos d'Esquadra de Catalunya, intervened.

A participation that began by structuring the operation of the PG-ME in the Catalan territory as an introduction and continued to reveal what the action plan of the administrative police is like and its status at this point in the year 2022. A key importance in its performance was the analysis of the data produced by the different inspections carried out in the past and its evolution.

Juan Carlos Gil Muñoz, Head of the Section of the National Sports Office, then appeared, whose arguments were based on what was previously mentioned and focused on the management of violence in sports and on his work in the world of gaming, which it focuses on collecting information on sporting events to provide it to judicial departments.

He explained how all the tools that are usually used to control violence can also be used for other types of criminal work, such as match-fixing.

This second discussion table was completed by Karen Sierra, Vice President for Latin America and the Caribbean of Gaming Labs International, who surprised all attendees by putting the magnifying glass on the regulatory framework and the ecosystem of the sector in Latin America.

She initially pointed out the similarities that its regulations have with the Spanish ones, due to the numerous existing associations with companies from Spain. Later she went on to explain that GLI, although it is known for its homologation laboratories, has great importance in the Latin American region by acting as consultants for various regulators in countries where there are still no, or are in process, the laws of the game.

She advanced by showing how their approval processes are, both for face-to-face gaming establishments and for online games and bets, all of this, always based on a Responsible Gaming framework.