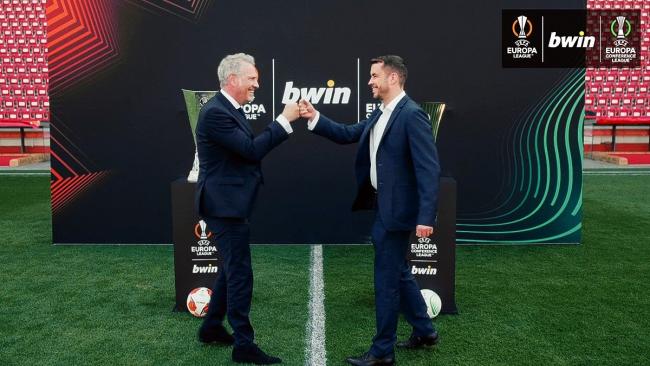 INFOPLAY |
2021/9/8
ADVERTISING
bwin has signed a ground-breaking partnership with UEFA to become an Official Partner of both the UEFA Europa League and the newly formed UEFA Europa Conference League, for the next three seasons. The partnership endorses bwin’s position as a world leader in responsible sports betting and will provide prominent branding presence in regulated betting markets around the globe.


The partnership demonstrates the commitment of bwin and its parent company, Entain plc, the global sports-betting gaming and interactive entertainment group to support football and responsible betting around the world.

This season, a total of 64 teams from 35 of UEFA’s 55 member associations participate in these two leading competitions in European football from the group stage onwards, covered by the partnership in matches which are broadcasted worldwide.

As the Official Betting Partner, bwin will enjoy high visibility in both competitions, appearing on broadcast backdrops and in stadia, including on extensive perimeter advertising, as well as on the websites and social media of these two UEFA competitions. A key element of the partnership will see bwin’s availability in supporting UEFA’s fight against match-fixing in order to maintain the integrity of the sport. To mark the partnership, bwin has launched a new dedicated website betresponsibly.info to highlight the range of tools bwin provides to help customers stay in full control of their gaming and promote bwin and parent company Entain’s safer gaming initiatives.

The sponsorship rights also provide the use of content and footage from both competitions on bwin’s own platforms, along with access to tickets and hospitality at matches for bwin to use to create incredible experiences and entertainment for its customers.

“We’re proud to be an Official Partner of the UEFA Europa League and the UEFA Europa Conference League alongside other major international brands. The partnership will provide an array of exciting opportunities to enhance our offer to our customers, creating unique new experiences and content. It also provides bwin with a formidable platform to reach fans in regulated sports betting markets around the world, highlighting our unparalleled combination of the best product and the most responsible environment in which to bet.”

“We’re delighted to have secured bwin as the first ever Official Sports Betting Partner for one of our competitions at Official Partner level. As a brand that defines itself by being in touch with fans and their passion for football and clubs throughout Europe, bwin is a great fit for our competitions.

The partnership with bwin allows UEFA to engage more openly with the sports betting sector, giving greater access to market intelligence and support from both a sports integrity and commercial perspective. bwin is the world leader in responsible sports betting with a rich and long-standing tradition of partnerships in football, supporting clubs, federations and competitions worldwide. Their vast experience with sponsorship activations will be an invaluable contribution for both competitions”.

Entain and bwin have long supported international football. In Germany, bwin became the first private betting provider to become an “official sports betting partner of the German Football Association ‘Deutscher Fußball Bund (DFB)’” in January 2019. This includes an advertising partnership with the DFB Cup, also with the national teams, as well as until summer 2022 with the Women’s Bundesliga and the 3rd League until summer 2022. In addition, there are sponsorships in Germany with Borussia Dortmund, 1. FC Köln, 1.FC Union Berlin, Dynamo Dresden and FC St. Pauli.

In Portugal, after sponsoring the league from 2006 to 2008, bwin signed a contract as name sponsor with Liga Portugal in the current season, which has since been called Liga Portugal bwin. In Belgium, there is a sponsorship agreement as Official Sports Betting Partner of the Jupiler Pro League.

These football sponsorships are complemented by bwin’s involvement in Greek basketball as Grand Sponsor of Olympiacos Piraeus Basketball Club and as Official National Sponsor of Euroleague Basketball.

A video with detailed statements on the new partnership by Stephan Heilmann and Guy-Laurent Epstein is available at this link: