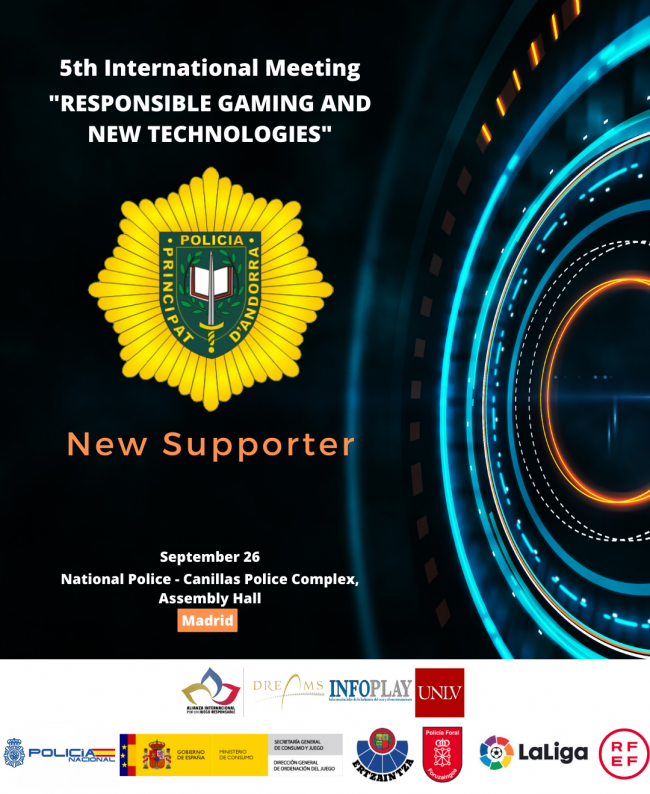 The Andorran Police joins the support of the V International Meeting for Responsible Gaming that will be held next Monday, September 26 in a hybrid way (face-to-face and virtual) from the Assembly Hall of the most important Police Complex in Spain, located in Canillas, Madrid.

INFOPLAY |
2022/8/29
From the very beginning of the organization of the meetings, the Andorran Police has shown great interest in supporting the event organized by the International Alliance for Responsible Gaming.

The 5th International Meeting for Responsible Gaming will feature simultaneous translation and the collaboration of the Ministry of Consumer Affairs, the National Police, LaLiga, the Royal Spanish Football Federation, INTERPOL, the Brazilian Ministry of Justice, the Navarre Provincial Police, the Mossos d' 'Esquadra and the Ertzaintza. Likewise, this reference event will have the special coverage of the newspaper AS as an exclusive media partner.

In this regard, this fifth edition will be presented live by the renowned founders of the International Alliance for Responsible Gaming (UNIVERSITY OF NEVADA, DREAMS and INFOPLAY): Bo Bernhard, Mariela Huenchumilla and Jacqueline Mecinas, respectively.

The event will feature contributions from important speakers such as:


The moderation of the conference will be made by the speakers Cecilia Pastor and David Calvete.