VIDEO: Delight yourself with the third panel discussion of the V International Meeting for Responsible Gaming 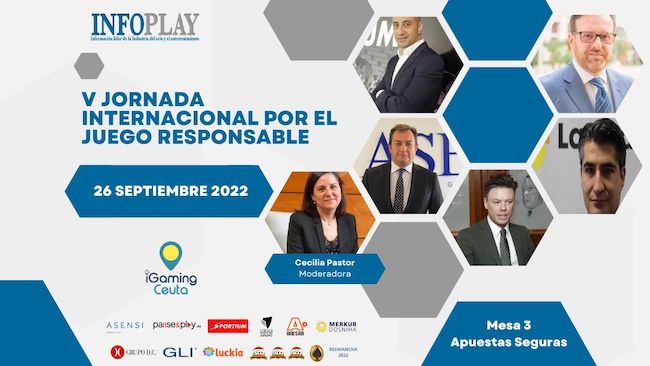 The third panel ran around the theme of sure bets and was introduced by Bo Bernhard. Later, Cecilia Pastor took the stage to moderate the speeches by Francisco Martínez, Felipe Sánchez-Pedreño, Alberto Eljarrat, Santiago Asensi and Clauido Marinelli.
INFOPLAY |
2022/10/20
The third and final table was introduced by Bo Bernhard, Vice President of Economic Development at the University of Las Vegas, who in his small participation highlighted the importance of building bridges and collaborations between different entities, as occurred at the V International Day for Gaming Responsible.

Once presented, the table was directed and moderated by Cecilia Pastor, Deputy Director General of Gambling Inspection at the Directorate General for the Regulation of Gambling, who first gave way to Francisco Martínez, lawyer for LaLiga.

The lawyer began by shedding light on what the actors are in a crime of sports corruption and questioning whether the user could be part of said crime. In addition, the possible aggravating factors that make the type of penalty that these acts entail were also analyzed.

Subsequently, Felipe Sánchez-Pedreño, Director of Corporate Social Responsibility at said entity, intervened on behalf of the RFEF and expressed concern about the bets by the protagonists of sporting events.

He continued by citing training as a capital tool to fight addictions, extending it not only to traditional football, but also to esports. Later he highlighted his collaboration with UEFA to implement their security protocols, congratulating himself on having met all the objectives of last season.

In his turn, Alberto Eljarrat, CEO of Sportium, highlighted the point of view of the operators in this entire fight against corruption in sports betting and explained it by explaining how fraud alarms are detected and how to proceed internally from within of a betting operator.

He rescued the agreement signed in 2014 with LaLiga, in a pioneering way to collaborate and lay the foundations of the current existing fabric between all the actors to eradicate sports fixing.

They do this using the SIGMA platform, in which all operators share information if it is necessary to mount a case and have it judged. This ends up translating into the “exemplary” assessment that the Spanish regulation has for operators.

One of the problems that is growing in recent years is based on identity theft; either to hide the bettor's information, to bypass the prohibited block or to access the bank information of another subject. This proliferation joins that of automatic data collection methodologies, such as "bots". All this was developed by Santiago Asensi, Managing Partner of Asensi Abogados.

His presentation revolved around safe bets and fraud prevention. During it, he provided more than interesting information, such as the method used to investigate fraudulent means and conduct in the gaming sector, also pointing to the need to further regulate all these situations in the absence of specific regulations.

In closing, Claudio Marinelli, Criminal Intelligence Officer and Project Manager of the Internpol Match-Fixing Task Force (IMFTF), delved deeper into all the issues that were discussed during the third round table.

He warned, looking ahead, that Interpol is preparing a specific operation to combat illegal betting on the imminent World Cup that begins in November.

He then unpacked the many tools they use to fight corruption in the world of sport from Interpol.

He concluded by emphasizing the importance that Interpol gives to bets, considering them to be of the same nature as a banking situation, with economic transactions.