A study by PwC warns of the growth of Illegal Gambling in France, Norway, Italy and Spain 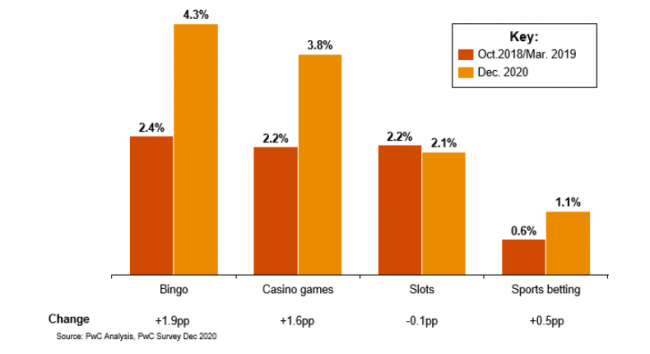 The Betting and Gaming Council (BGC) warns that British players using black market websites to place bets has doubled, according to a new PwC study published on February 4.

INFOPLAY/ COMUNICADO |
2021/2/8
The land-based gambling association in the United Kingdom has explained that the study entitled 'Review of unlicensed online gambling in the UK' is based on data collected during November and December 2020. In this regard, the report reveals a series of worrying trends , including doubling the money wagered with unlicensed operators, a jump from £ 1.4bn to £ 2.8bn, compared to a similar study in 2019.

Likewise, the report indicates that the number of customers using an unlicensed gambling website has risen from 210,000 two years ago to 460,000.

Considering the above, the BGC continues to support further changes to the regulated industry, but is urging ministers to make sure any brought forward as a result of the Gambling Review are carefully thought out.

Michael Dugher, CEO of BGC, said: "This new report by PwC is an impressive and comprehensive piece of work which demonstrates how the unsafe, unregulated black market is a growing threat to British punters."

Likewise, Dugher emphasizes that illegal sites do not have tools for the protection of users such as age controls and verifications, among others.

On the other hand, the new report also suggests that the size of the online black market is larger in countries where the regulated betting and gaming sector is less competitive.

The report's results point to countries such as France, Norway, Italy and Spain, which have stricter restrictions for licensed operators, as examples of countries where black market share is higher than in the UK.

In conclusion, Dugher explains: “The UK risks sleep walking into changes where the main beneficiary is the unlicensed black market. We all have an interest in getting future changes right, so must take heed of this latest evidence and look at what is happening elsewhere around the world. "

From the report presented by PwC, we highlight a section dedicated to the potential impact on the scale of the unlicensed market, from which the following conclusions can be drawn:
READ FULL REPORT