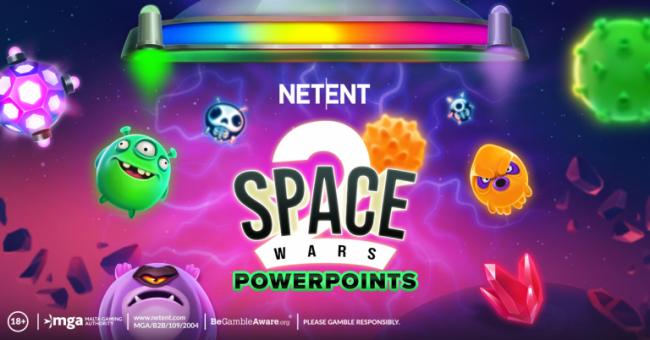 NetEnt announced that it has launched a nail biting, galaxy stopping sequel, Space Wars 2™ Powerpoints™. Players who loved the original Space Wars™, will thoroughly enjoy this new iteration that brings back all their extraterrestrial favorites – and throws in a few new features that will keep them on their toes.
INFOPLAY/ COMUNICADO |
2022/7/4
NetEnt highlights that a whole range of high-tech features can be activated in this high volatility slot and players should watch out for a myriad of symbols such as Blasters, Zappers, Bombs, Wilds, and win inducing combos that rocket through the reels. With combos, players can get the best this new galaxy has to offer – landing Column/Row Blaster, Zapper or Bomb symbols adjacent to each other makes them combine into a much more powerful feature.

We must point out that each feature of Space Wars 2™ Powerpoints™ moves players one step forward to big wins. With the Column/Row Blaster, players can blast away all who stand in their way. A 4-symbol horizontal match awards this Blaster symbol, removing all symbols except Wilds and feature symbols from the reels where the Blaster appears.

Now, the company reveals that Powerpoints™ are the rocket fuel for this slot. Each match awards Powerpoints™ which are then added to the collect meter at the top of the reels. As players fill up the meter, they move up the levels and increase their win multiplier.

Referring to this magnificent sequel, James Jones, Head of Business Development at Evolution, said: “This game has it all – an epic intergalactic showdown, fantastic characters, thrilling graphics, and features that make each spin an adventure. The original Space WarsTM found a special place in players’ hearts, and we’re excited to be launching the sequel this year.”