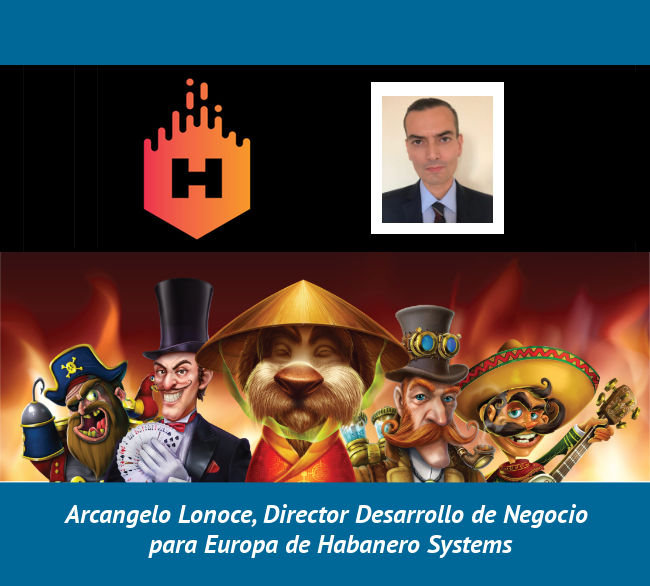 After obtaining the authorization of the DGOJ that will allow the company to offer its portfolio of games to operators in the Spanish market, the head of Business Development for Europe of Habanero Systems, Arcangelo Lonoce, reviews the current situation of the sector in a interesting interview.

Italy and Spain, two of the markets in which Habanero Systems has the most presence, are two countries with enormous similarities in their regulated gaming markets and, unfortunately, have also become the two main sources of impact of the Covid-19 crisis. That is why the interview granted by Arcangelo Lonoce to CasinoBeats.com offers us interesting opinions on how the company faces the new scenario that opens after the remission of the outbreak, and analyzes from a regulatory and business point of view how it has affected the Spanish market the advertising restriction during the State of Alarm and reviews the potential of both markets for a game developer like Habanero.

After the tremendous success in Italy, Arcangelo Lonoce, head of business development for the firm in Europe, explains Habanero's plans to replicate this operation in Spain:

"Spain and Italy have a lot in common. From a cultural perspective, both nations are known for having populations that love to socialize and spend a lot of time away from home. This partly explains why the two markets share strong land and retail heritage and They have undergone a more gradual transition to the online sector than many of their European counterparts.

Of course, this transition has been accelerated by the widespread closure of face-to-face points of sale and retail stores, as countries have imposed two of the strictest blockades on the continent.

However, the move to the Internet was already underway in both Spain and Italy long before the outbreak, and the previous market experienced a 270 percent increase in online gambling in the past five years, with a vertical of 15.2 percent casino compared to the previous year. 2019".

Some similarities that also explain the intention that the Spanish regulated market adopt the restrictive measures at the level of advertising that were taken in 2019 in Italy:

"Certainly the two countries are also comparable from a regulatory point of view, with Italy imposing a total ban on advertising and Spain clearly moving towards a similar position. For suppliers like us, Spain's technical requirements are somewhat stricter and offer a number of additional steps in the license application process.

Also, and aside from the demographics favoring Italy with over 13 million citizens and a much larger number of middle-aged people, this could help explain why Italy has a total online casino market of three times bigger in terms of GGR with Spain it has only 51 licensees compared to 79 currently in Italy ".

In any case, Habanero has learned a lot from this stage in Italy and Arcangelo Lonoce hopes to take advantage of it in his business strategy in Spain:

"Italy is the most powerful Habanero market in Europe, and in recent years we have been strengthened there. 60 of our most popular games are now certified according to the requirements of the national regulator and we have launched with some of the most popular operators Acquaintances in the country, including StarCasinò, Sisal and Eurobe. Therefore, we have enjoyed tremendous success in Italy, but have nevertheless learned a lot from the process. First of all, getting to know the regulatory and technological environment in that it is operating is absolutely essential, especially during the integration stage.

It is also essential to understand the new market and what you provide in detail. This allows you to clearly identify any gaps that exist and how your business can fill them. Recognizing your own Internet service providers is crucial, and the goal should be to supply products that are new to the market while continuing to deliver."

When asked about his Spain he has more or less potential than Italy in face-to-face betting, Lonoce is clear:

"Spain and Italy have undergone a similar transition, although the Spanish online market seems to weigh much more than the Italian in terms of overall revenue, which translates into much greater business potential. The two countries share a cultural preference. by retail gambling, so they've been somewhat slower than other markets in making the switch to the internet. Younger players in particular now demand a gaming experience that can be delivered on the go. However, demographic changes, Long-term regulatory and technological issues have caused Spain and Italy to start switching to the Internet.

Younger players, in particular, are now demanding a gaming experience that can be offered on the go, and the introduction of regulation has attracted promising investments. For example, Spain's online sector has grown 327 percent since regulation in 2012, and many stakeholders in the industry expect the trend to continue. "

On changes in consumer habits, Lonoce explains some of the news that the company and the sector in general expects; Highlighting in the first place the growth of the game on mobile devices and also a greater sensitivity for Responsible Gaming and honest advertising in the field of gaming.

"Our industry would do well to avoid over-generalization: many have tried to forecast changes in player behavior in the past and have not always done well. Technological changes cannot be guessed, and it would be too simplistic to suggest that players simply They will connect online when the points of sale close.

It is also unclear whether those moving online will return to ground or retail betting when it is safe to do so. The player experience is completely different and does not necessarily come in parallel with the players when it comes to preferences.

That said, it is safe to anticipate that players who want to continue gambling during the summer will have to do so online and this will likely lead to an increase in the use of mobile devices. However, the younger generation has a well-established preference for mobile betting, making it difficult to determine how much of this change is caused by the ongoing COVID pandemic.

The key here is flexibility, and the recent Italian restrictions have served to demonstrate the impressive versatility and agility of our product offering.

The country's advertising ban stimulated a renewed focus on product development, with everything from greater synergy with the retail market to the flexibility of product, marketing and business intelligence tools put under the spotlight, which made us an invaluable partner for people like Sisal, SKS365 and Eurobet, and more recently Betsson's Star Casinò. "