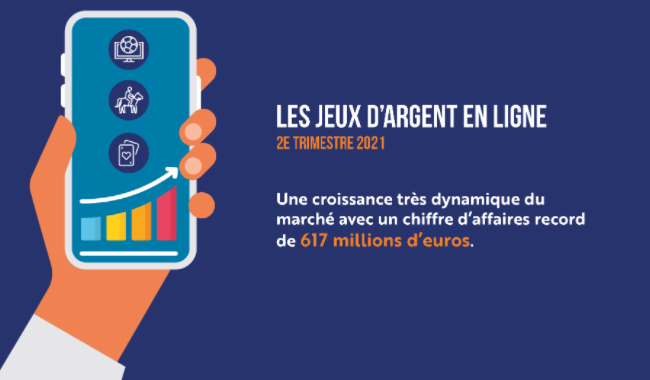 The National Gaming Authority (L'Autorité Nationale des Jeux, ANJ) has published a new report summarizing French online gaming activity during the second quarter of 2021, which confirms the dynamic growth of the gaming market with a record turnover of 617 million euros, its highest level since the opening of the online gaming market in 2010.
INFOPLAY |
2021/10/18
ADVERTISING
ANJ has explained that the growth is related to an attractive sports calendar that the Eurocup and the Roland Garros Grand Slam had that had an undeniable impact on the exceptional rotation of sports betting, as well as the registration of new players.

According to data from the gaming authority, the activity was carried out by more than 3.3 million players in accounts, or almost 260,000 additional players compared to the first quarter of 2021 (+ 8% of additional accounts).

In the specific case of sports betting, turnover reached 420 million euros, the highest level ever recorded in a quarter, that is, a GGR that represents 68% of the total turnover of online gaming open to competition.

In this regard, bets on the Eurocup and Roland Garros accounted for 22% of the activity in the quarter. As a reminder, € 434 million of online uploads were recorded throughout the euro. At the same time, the group of sports bettors for the quarter reached 2.8 million active player accounts (+ 12% compared to the first quarter of 2021).

Likewise, the pool of horse racing bettors is also growing this quarter. In fact, nearly 363,000 players per account have placed bets on an equestrian show for the quarter, up from 319,000 last year for the period, an increase of 14%. In the first half of 2021, sales reached 205 million euros.

Referring to the results of the second quarter of 2021, Isabelle Falque-Pierrotin, president of the ANJ, comments: “The French are always more numerous to bet online and, of course, the Eurocup has boosted the sports betting segment whose billing hit another record this quarter. This growth testifies that the French model, although highly supervised, is not a brake. "