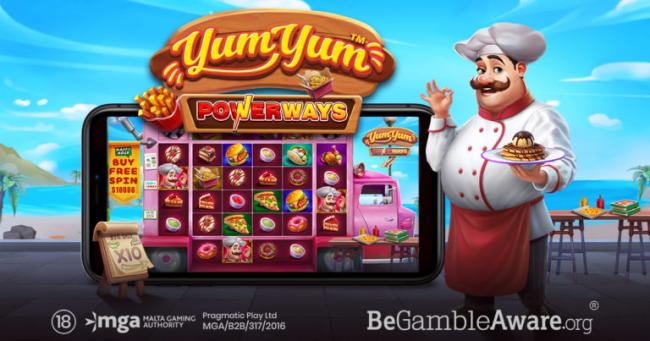 Pragmatic Play announces the launch of Yum Powerways, a slot that offers the chef's most delicious recipes with 16,834 ways to win as well as multipliers, jokers, and bonuses as star ingredients.
INFOPLAY |
2021/9/3
ADVERTISING
Pragmatic Play has reported that Yum Powerways has a central 4 × 4 grid reinforced by outer reels that can deliver even higher pay-outs, with each of the 16 symbols in the matrix acting as independent reels.

Also, the company emphasizes that any win will grant a respin that will also increase the multiplier by 1x.

During base play, three or more Scatters can trigger Free Spins, where players will either enter the Gamble Bonus Game or the Free Game. Yum Yum Powerways is a multi-step bonus game, where the player will have a choice either to gamble or keep his current award each time. If the player wins, their award is increased and if they lose, the award is reduced.

On the other hand, we highlight that with a multiplier that increases to 3x, as well as with roaming wilds, huge winnings can be obtained in the bonus game of up to 5,000x.

Similarly, the Powerways feature sees players able to win with four symbols in a row from left to right, right to left, up to down and down to up. The increased ways to win ensure players remain engaged for every drop of a symbol.