The CRYPTOCURRENCIES in GAMING, a great topic of presentation and debate by the award-winning Beatriz Hermosilla, Chief Inspector in the Cybercrime Unit of the National Police 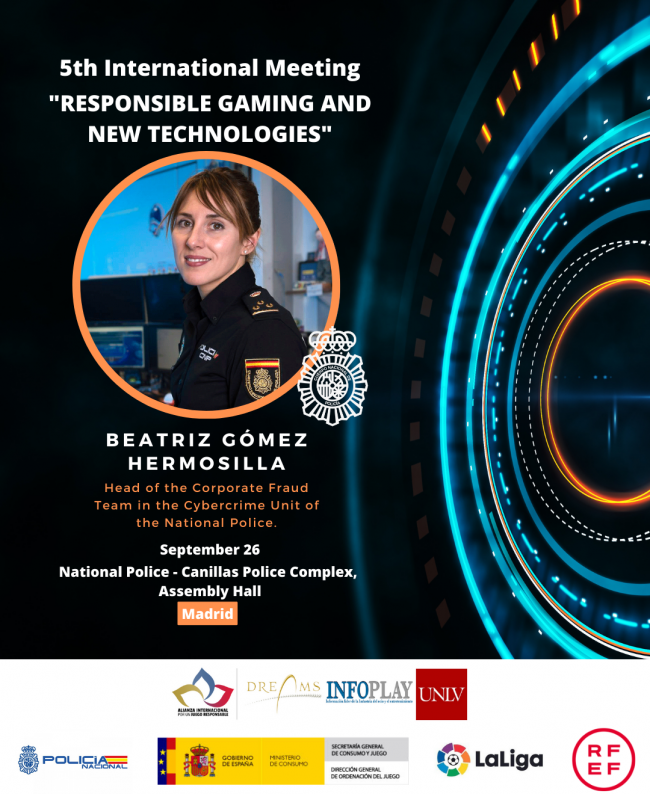 Beatriz Hermosilla, Chief Inspector in the Cybercrime Unit of the National Police, will participate in the 5th International Conference to be held in the Canillas Police Complex Assembly Hall on September 26.

INFOPLAY |
2022/9/7
Between 9:00 a.m. and 2:00 p.m., the V Conference will address the topics of SAFE BETTING, PREVENTION OF RIGGING, APPROVAL and COMPLIANCE, MONEY LAUNDERING PREVENTION, SECURITY or CRYPTOCURRENCIES with organizations as relevant as EUROPOL, INTERPOL, LaLiga, the Royal Spanish Federation of Soccer, the Ministry of Justice of Brazil, and all the police forces of Spain including Mossos d'Esquadra, Ertzaintza, Foral de Navarra. The main representatives of the Andorran Police and the Ministry of Consumer Affairs through the Directorate General for the Regulation of Gambling will also be present.


The great topic of the use of cryptocurrencies in the game will be addressed by one of the great specialists of the National Police, Beatriz Hermosilla. The chief inspector was decorated last year by the United States Secret Service with the highest distinction never before granted to any Spanish citizen.

Starting on the 9th, the registration process for this unique and very important meeting will be opened for all those summoned, as stated by David Calvete himself, Head of the National Police Games of Chance and Betting Control Service, qualifying the Conference as "MILESTONE": "IT IS A MILESTONE FOR ALL POLICE FORCES AND FOR THE GAMING SECTOR"

We remind you that the Conference will have the special coverage of the newspaper AS as an exclusive media partner.

The other confirmed speakers are:


BEATRIZ HERMOSILLA,
Chief Inspector in the Cybercrime Unit of the National Police

It is important to mention that the next edition of these reference conferences in the sector will be presented live by the founders of the International Alliance for Responsible Gaming (UNIVERSIDAD DE NEVADA, DREAMS and INFOPLAY): Bo Bernhard, Mariela Huenchumilla and Jacqueline Mecinas, respectively.

The moderation of the event will be in charge of Cecilia Pastor, Deputy Director General of Gaming Inspection and David Calvete, head of the Control Service for Games of Chance and Betting of the Spanish National Police.

The organization thanks all the companies that are making an effort to make visible the commitment that unites all the agents involved in responsible gaming and in a sustainable industry.