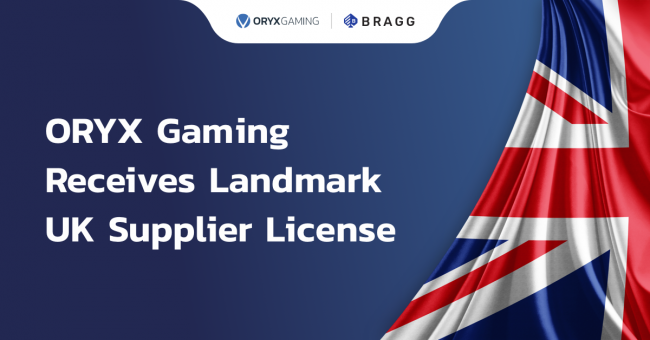 ORYX Gaming, a Bragg Gaming Group company, has announced that it has been licensed in the UK, allowing it to enter one of the most mature iGaming markets in the world.
INFOPLAY |
2021/11/25
ORYX Gaming has described this new achievement as a milestone in the company's history, which will allow them to substantially increase their global reach to the largest online gaming market.

It should be noted that ORYX Gaming will be able to provide its content to a wide range of operators, including some of the most important and established brands in the industry.

Through a press release the company says that the initial batch of slots includes games developed by ORYX’s in-house studio and exclusive titles from Gamomat, with these titles expected to begin rolling out with operator partners before the end of the year.

The total addressable market (TAM) for the online casino sector in the United Kingdom in 2021 is approximately US $ 5.5bn (£ 4.1bn) according to H2 Gambling Capital, making it the largest regulated iGaming market in the world. Along these lines, Bragg increases its market share in regulated jurisdictions and ensures entry into new territories.

The company expects its global market expansion initiatives to increase its TAM sixfold in 2022 to more than $ 18bn, of which the UK market will account for just under a third.

On this important achievement that allows them to accelerate their international growth trajectory, Chris Looney, commercial director of Bragg Gaming Group, said: “The UK online gambling market is unmatched in terms of size and maturity and the world's leading operators all have a presence in the jurisdiction".