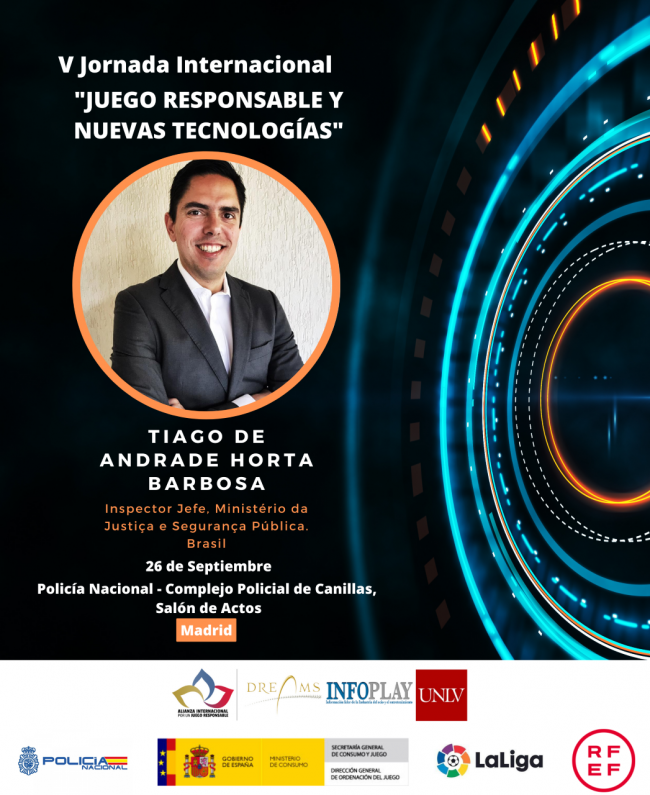 Tiago de Andrade Horta Barbosa will be one of the personalities who will accompany us at the 5th International Conference for Responsible Gaming that we will celebrate in the largest police complex in the country, the Canillas Police Complex in Madrid.

Tiago de Andrade Horta Barbosa, Chief Inspector of the Ministry of Justice and Public Security of Brazil, will be one of the speakers at the V International Conference for Responsible Gaming and has valued his participation by stating: "It will be a great pleasure to represent the Federal Police of Brazil in this important event that will take place on September 26".Canillas Police Complex

INFOPLAY |
2022/8/31
In addition, his presentation and participation in the debate comes at the most appropriate time. This week the Brazilian Ministry of Justice, which he represents, has asked the different soccer clubs, federations and the television network Globo to present their advertising contracts with companies that are linked to sports betting services. Therefore, his testimony will be crucial to have a clear and global idea of the good development of the gaming industry combined with sports activity and its sponsorships.

Tiago de Andrade Horta Barbosa has a degree in International Relations and Law with a Postgraduate Degree in Management and Sports Law (FIFA/CIES/UCA). In addition, he has a master's degree in Sports Law (ISDE Madrid).

His important professional career includes having served as an INTERPOL Police Officer (2012 – 2014), Director for Business Development and Sports Integrity at SPORTRADAR AG (2016 – 2019) and from 2003 to now he is a Federal Police Agent.

On the other hand, he has been a consultant in the sports area, highlighting his position as auditor of the Anti-Doping Court of Sports Justice from 2020 to date. We should also mention that he is a member of various ethics and integrity committees (Brazilian Cycling Confederation, Brazilian Gymnastics Confederation and São Paulo Soccer Federation), a member of the Committee for the Defense of Fair Play of the Brazilian Olympic Committee and is a former prosecutor of the Superior Court of Soccer Sports Justice.

The fifth edition of the International Conference for Responsible Gaming will be held next Monday, September 26, in the Assembly Hall of the Canillas Police Complex in Madrid, and will revolve around "Responsible Gaming and New Technologies".

This new edition has the institutional support of the Ministry of Consumer Affairs, the National Police, LaLiga, the Royal Spanish Football Federation, INTERPOL, EUROPOL, the Brazilian Ministry of Justice, the Navarra Provincial Police, the Mossos d'Esquadra and the Ertzaintza. Additionally, the event will have the special coverage of the newspaper AS as an exclusive media partner.


Meanwhile the moderation of the event will be in charge of Cecilia Pastor, Deputy Director General of Gaming Inspection and David Calvete, head of the Control Service for Games of Chance and Betting of the Spanish National Police.