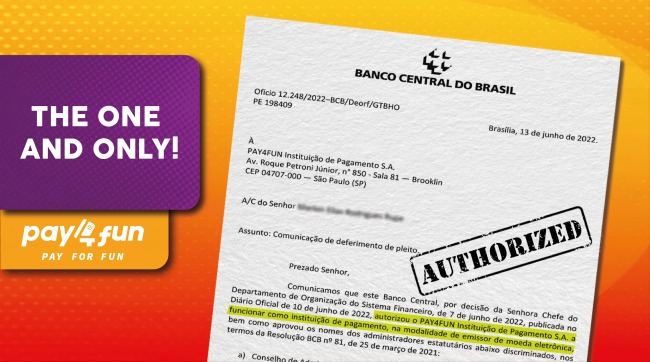 The digital payment platform Pay4Fun confirms that it has obtained authorization from the Central Bank of Brazil to operate as a payment financial institution for online betting.
INFOPLAY/ COMUNICADO |
2022/7/28
Referring to this important achievement, Leonardo Baptista, CEO of the company, said: "We were born with a focus on the online betting segment and today, of the more than 500,000 customers, 90% of them are online players."

“Our performance has as main guidelines transparency and security, which is why we have developed strict compliance and digital security criteria to prevent money laundering. Every operation within Pay4Fun goes through verification of the origin and destination of the money transacted,” he added.

The company works with the main entertainment players, with more than 300 sites integrated in the online betting segment, such as 1XBet, 888, Betfair, Betsson, KTO, Pinnacle, Pokerstars, among others.

In this regard, the CEO of Pay4Fun refers to the future and says: “Our idea is to expand with new partner sites, since in Brazil there are more than 500 sites, not counting the ones that should arrive after the regulation of the law”.

Also, Pay4Fun has innovative products in its portfolio such as Pay4Fun Store and Pay4Fun Card Mastercard, Pay4Fun App and Pay4Fun GO (direct payment gateway, with PIX, bank transfers). In 2021, Pay4Fun handled more than BRL 1.1 billion (204.7 million euros approximately) and the expectation for 2022 is to reach the milestone of BRL 3 billion (558.4 million euros approximately).

To conclude, we must point out that in Brazil betting companies are the largest sponsor of Brazilian football clubs: More specifically, around 34 of the top 40 clubs in Brazil have this sponsorship.